A Sailor of King George 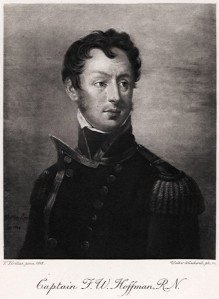 As part of the research I’m conducting for a novel I’m working on, I’ve just finished reading a rip-roaring tale of high adventure – and it’s all true!  Straight from the horse’s mouth, as it were, from an officer and gentleman who saw and survived 45 years in His Majesty’s navy (according to his own reckoning at the end of the tale).  Captain Hoffman, who began as a lowly mid (midshipman), survived yellow fever twice, was a prisoner of war twice, lost the hearing in one ear (and part of the ear), survived countless battles (including Trafalgar), and spent years at a time separated from his family, yet all with a keen eye for detail, and a sailor’s knack for conveying what he saw with humour and a vivid imagination.  He had a tongue-in-cheek writing style, and I found myself laughing many a time at his gentlemanly wording of euphemisms, such as when they attacked an enemy vessel and boarded her: “She (the ship) received us as warmly as if she had known us for years. I took the liberty of shooting a man in her main rigging who was inclined to do me the same kind office, had I not saved him the trouble.”

He also had an amazing repertoire of similes, and here are just a few: 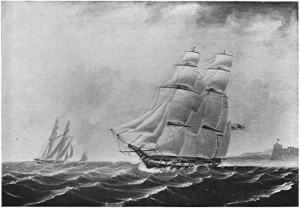 HMS Apelles; Illustration from the book.

Captain Hoffman was commander of several vessels, including the HMS Apelles; Wikipedia has an interesting article regarding the fate of that particular ship; Hoffman was taken prisoner as a consequence of his gallant actions, and spent over two years as a POW in France; Bonaparte refused the usual gentleman’s agreement of prisoner exchange, leaving men to languish in prisons until he was defeated and deposed (for the first time, in April 1814).

This gem of a book can be found free of charge at Gutenberg.org, and I would highly recommend reading it if you have any interest in military history, natural history, or social history, or just love a good tale – Hoffman covers it all!

A melancholic pragmatist with a wide streak of mischief and an active imagination that turns into novels.
View all posts by Trinity »
← Pietre Dure: Eternal Paintings
Battle Of Trafalgar from the H.M.S. Tonnant →