I love coming across websites that combine humanity with a history that is as unique as the people involved.  I recently came across “Dear Photograph,” a viral concept that encourages people to take photographs of photographs in the same locations, and to tell the story of the original photograph in the submission.  Take some time and browse through this site; you’ll be glad you did!  Just click on the photo below: 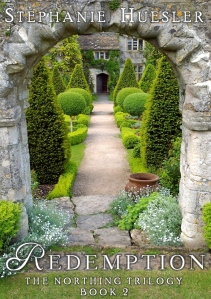 Announcing the release of my second book, Redemption!  At the moment both books are available on Kindle, and coming soon in paperback.  If you enjoy 18th century fiction a la Jane Austen or Georgette Heyer, I think you’ll love these two books!  I’ve thoroughly enjoyed writing them; before writing the third book in this series, however, I’ll be finishing two other manuscripts, in vastly different genres.  So keep your eye out for more news!

The reason for the brief interlude between the releases of The Price of Freedom and Redemption is that the second was nearly complete when I released the first one; POF had been done for a few months by the time I actually had time to sit down and go through the publication process for the first time properly; don’t think either book was rushed, as I’m meticulous with the nuts and bolts, and I would like to think quality, though that is up to the reader to assess, not me!

To read a snippet of the book and find out more, please check out my “The Northing Trilogy” page and let me know what you think – I’d love to hear from you!

The History of the Nativity & Christmas

In 1223, in Greccio, Italy, Saint Francis of Assisi is accredited with creating the first Nativity Scene.  We tend to think of commercialism and materialism as a modern disease, but in fact Francis created that display to be a visual reminder of what Christmas was all about, and to counter what he felt was a growing emphasis on secular materialism and gift-giving.  It was to be a day of celebration and worship of thanks to God for what he had inaugurated through the birth of the prophesied Messiah, Jesus.

When we think of a modern nativity scene we think of a few elements as standard:  Shepherds, Jesus in a wooden manger of straw, three kings, angels, and cattle and donkeys and sheep.  In fact, the stable was more likely a cave or a small hand-dug dugout, a shelter for animals in cold weather or raids, and perhaps a place to store surplus grains or foodstuffs.  The manger was a feeding trough, much like modern feeding troughs found on small farms.  The shepherds “watching the flocks by night”  tells us that it was likely in spring or summer in that region; the day we celebrate as Christmas was adopted throughout Western Europe in the fourth century.  Imagine the scenario:  Rome had called for a census of the entire region, turning everything on its head as everyone was required to travel to their ancestral homes, including businessmen like Joseph, and innkeepers as well.  Hundreds of people descended en masse onto a sleepy little village unequipped with beds or food to cope with them all.  Perhaps Joseph had tried at several places; perhaps there was only one Bed & Breakfast in the entire village; turned away, they headed back to the stable to get their donkey, and uh, “Wait!  The baby’s coming!”

The kings were actually Magi, likely a caste of scientists and astronomers, from the “east” – i.e. east of Israel, which could have made them Asian, Indian, Caucasian, or African.  There were not three, but rather three gifts:  Gold, Frankincense and Myrrh.  In reality their number might have been more like a small army (they would not have travelled such a distance with the quantities of gifts fit not only for a king but representing their own importance as well as the honour they wished to bestow on this new king, without protection!); the Bible records that King Herod and all Jerusalem were disturbed by their presence and the reason for their journey (Matthew 2).  The three gifts offered by the Magi were very telling:  Gold was a symbol of kingship, the wealth of the earth.  It is one of the only metals that, when heated, loses none of its nature, weight or colour, but allows impurities to surface.  It is used to symbolize faith and the process of refinement.  Frankincense represents priesthood and divinity.  It was familiar to most people in the ancient world, used in religious ceremonies.  Myrrh, unlike sweet Frankincense, is bitter.  It was used as a resin in a spice mixture used to embalm the dead, and was symbolic of Jesus’ purpose in coming:  His death, burial and resurrection.  It makes an appearance both at the beginning and the end of Jesus’ life on earth.  It was used medicinally as a pain killer (often dissolved in wine) which is the reason Jesus refused to drink it on the cross (Mark 15:23).  And note that the Magi did not show up at the manger in Bethlehem, but by the time they’d travelled that far and found Jesus, he was a child, and Mary and Joseph had set up house (Matthew 2:11)

Let’s address one more historical topic:  Xmas.  Many people think it’s a modern attempt to “X” Christ from Christmas; but in fact it is just the opposite, historically-speaking.  The X is the first letter of the Greek word Χριστός which comes into English translated as “Christ.” and such abbreviated references date back as far as the Anglo-Saxon Chronicle, 1021.  Even further back, ΙΧΘΥΣ (Icthus) was an acronym meaning “Jesus Christ, God’s Son, Saviour” used by ancient Christians.  It is often placed within the symbol of a fish, as Jesus called his disciples to become “fishers of men.”  Ichthyology is the study of fish, reflecting the Greek connection for the use of the symbol.

Modern Nativity scenes represent a condensed version of a historical event (there is more historical evidence for Jesus’ birth, life, death and resurrection than many other events in history people simply accept as fact); so the next time you see one, think about the significance, the reason for its inception by St. Francis of Assisi in the first place, and the Reason for the season.

This Day in History: 7 December

History is an amazing, living creature:  If we do not look back at our past, we are doomed to repeat it; if we look back too much, we miss our present and future.  But all three phases in our life, measured as we do by the passage of time on this planet, are simultaneous, important, and influential on the other two at any given moment:  If you decide not to get out of bed in that fleeting moment of “now,” the events that unfold in your future will be altered.  If you decide to pass on an act of kindness done to you by someone in your past, you will change the state of your present attitudes and outlooks, and change the course of events in someone else’s life in the process.

With that in mind, here are a random selection of historical events that took place on this day, 7 December.  They may be mere statistics to us now, but at the time they were life-altering, history-changing, significant events to be overcome, survived, or defeated by.  Of those tragic events that took place within your lifetime, take a moment of silence out of respect for the loved ones that were left behind to pick up the pieces of a life altered without warning… it’s a day relatives, children, spouses and parents will never forget.