So far this past week, we’ve crammed more activities into one week that we’d previously done all year.  There is a lot of beautiful scenery here in Switzerland, and though we spend time in the mountains, we also like museums of all shapes and sizes.  Our busy holiday started a week ago when my husband took a few weeks off from work, and our first stop was just over the hill range in the next valley, known as Furttal:  We had a private tour (given by an old family friend) through the local mammoth museum; it is one of the few in Europe.  Roughly 185,000 years ago, glaciers and glacial lakes came and went, and the intermittent stages formed lush valleys filled with wild grasses & forests – the perfect place for mammoths to forage.  Fortunately for us, but unfortunately for the mammoths, the ground could sometimes become swampy, trapping victims, and thus preserving their remains intact.  Today, any construction site in the valley is likely to find fossils, and the archaeologists are called in on a regular basis – whether by construction crews or by farmers whose ploughing churns up artefacts (from prehistoric to Roman).

To read more details about the findings, click on the image above for a scientific report (PDF), or on the link above for the museum information.  And just as a side note:  Mammoth teeth are huge, and were formed with ridges that ground their food between the top and bottom teeth (see image below, showing a fragment in comparison to a whole tooth). 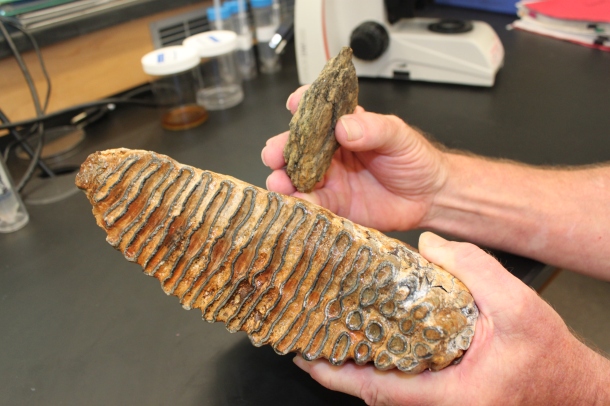 In researching my present manuscript, I’ve come across quite a few books that are out of print, but perpetuated on the internet.  [Gutenberg Press is a great site for finding such treasures, and many (if not all!) are in Kindle format as well as other formats such as PDF.  Even if you don’t have a Kindle, you can download their free app to your PC, tab or smart phone; all you need is an Amazon account.]

Here are a few of the titles I’ve found on Gutenberg that are pertinent to the current novel I’m writing:

Not all of these books are in the era that I need for my particular story, but their historical value is nonetheless valuable.  I’m working my way through this list, as I can and as my research needs dictate, but if you’re interested in any of these topics, take a look at Gutenberg Press!

On our recent holiday/research trip through parts of Norway, we came across an amazing site:  Eidsborg Stave Church and the Vest-Telemark Museum.  We went to Eidsborg with the intention of seeing the outside of the Stavskyrkje (stave church) there on our way to the Heddal Stave Church; instead we spent swift hours there!  It started off with a private guided tour from a local guy (“local” meaning his family has lived in the area since the 1300s), who was both understandably proud of local history and knowledgeable, as well as enthusiastic.

The museum itself is modern, beautiful, excellently staffed and convenient, with free wireless connection, a cafe and a gift shop, but most importantly, an extensive exhibit of the history of Vest-Telemark.  The rural life from the late 1700s to 1900s is colourfully laid out, with printed information sheets at each station in Norwegian, English and German.  There’s a strong sense of pride in local culture, and you can breathe in the history of the place.  Literally.  The buildings on the property, some of which you can enter, live and breathe the lives of those who lived there; the musty smells of old leather, damp earth, mildew in the wooden and thatched walls and roofs, the smell of pine wood, the turfy aroma of the blackened pitch-coated walls of the Stave church itself, and the sight of dusty sunlight streaking in through wallboards into the barn, the smithy, a cottage, storehouse, stable, or the mill.  There was even a sauna, built around 1895 (saunas weren’t used back then as they are now; they were places to dry grains for storage, or to steam out fleas and lice from fur rugs and coats).

The church is typical stave construction:  The staves are corner pillars used to support the edifice, and the interior of the roof uses the same skeletal structure as the Viking longboats – if it works (and those ships worked better than anything on sea, river or lake for centuries), why change it?  The inside of the church is rich in history:  Carvings from the 1200s, intricately painted walls from the 1600s, a statue of the patron saint of travellers (St. Nicholas of Bari) watching from the corner (as an antique replica – the original is in an Oslo museum), and the dusty light of sunlight peering through small holes near the upper beams. The latter mainly served to provide a bit of light as well as fresh air:  Candles could only be afforded for the clergy, so it would have been extremely dark without those holes; sermons went on for hours back in olden days and there were no seats until the middle ages.  Everyone in the parish was required to come, punishment or humiliation being the course of the day if they failed to appear for service, and in the tiny space allowed inside the original church, it would have been standing room only, packed in like sardines.  If someone fainted from lack of fresh air, it probably wouldn’t have been noticed until everyone filed out.  Today there are pews, and it is used weekly as the parish church through the summer and autumn; it is closed for service during the colder months as heating it would cause decay of the paintings and interior woodwork.

Details on the gallery

Wooden-shingle clad from the ground up, it gives the building the appearance of dragon’s scales, and having been coated with thick pitch for centuries, it looks quite as if it has been charcoaled; it smells wonderfully peaty, like a strong dark whiskey, and on a sunny day you can smell the aroma a good distance away.  The gallery along three sides of the church reveals many interesting details, from the wooden spikes used to nail the shingles to the roof to the outer curve of the stave pillars jutting out into the gallery.  It’s living, breathing history, and a pleasure to have been there.  It’s a place worth revisiting the next time we’re in the area.